More evidence of price fixing in Hoole, Chester by the countries top probate lawyer has come to light today as can be seen in this graphic below. 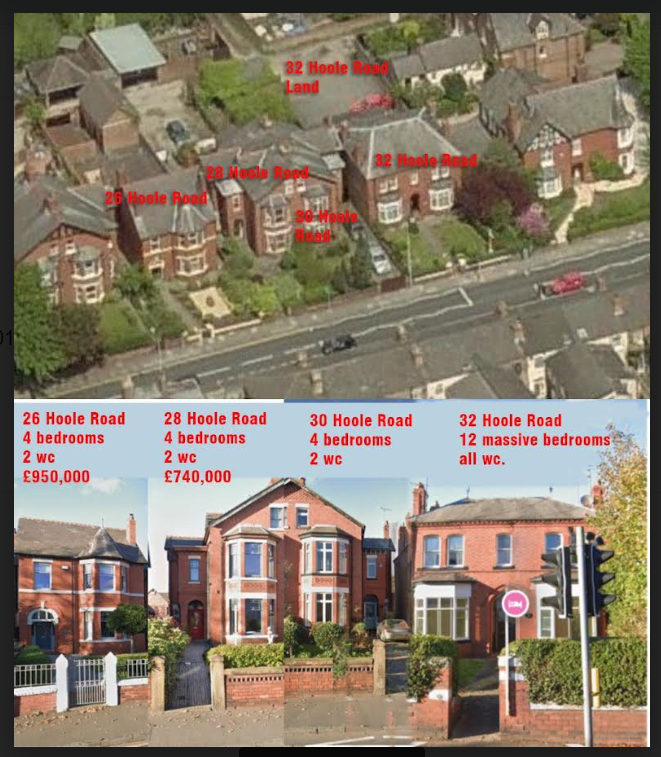 More evidence of price fixing in Hoole Chester, so here we have proof that Bartlett’s of Chester/Liverpool and the super dooper BLM Law duo of James Beresford and Charlotte Pritchard who broke a December 2019 Liverpool high court ruling by judge Hodge not once not twice but 3 times so far for 32 Hoole Road.

Cavendish Residential in Chester wanted to sell it for offers over £800,000 but 2 weeks on the market reduced it to £500,000 if your local just ask them why before you become another victim?

Probate Scam is not in anyway saying all these properties other than 32 Hoole Road is not worth it but come on how is it possible that 32 can be almost half its price is not at all possible.

Of course would anyone give Prichard and Beresford any credit for first using a fraudulent RICS valuation they both stated in court documents they were NOT using that report but failed totally to get another one done before placing it on the open market shows clear price fixing in order to help their friends not to say anything about destroying neighbouring properties future values.

This is not a victimless crime, they need lots of so-called fellow professionals to hoodwink the public into thinking at worst its just an one off when its in reality widespread legal fraud.

When we first broke this story on Internationalscotland.com Charlotte Pritchard deleted all her social media linking her and James but we took screen captures before publishing, unlucky!

James Beresford then became a client of his own firm boy they had this boy good and he was a partner at the time so either he knew it was wrong or he was deliberately parachuted in to do the dirty on this property.

We heard today MA the police detective (that looks after local crimes against the elderly) that gains in this probate where Cheshire police fails to investigate him, had possible links to this guest house before Mrs Banks fell ill, yes we find out everything Michael.

Why would he use Bartlett’s when everyone locally complains of him and when he knows he was fined by his regulator for £300,000 in the past makes no professional sense.

Anyone reading this will suddenly know wow so many parts needs to be linked for this to work, well we are only scratching the surface much more to come let us assure you all.

P Bartlett & Co. now trying same trick at 30 Hoole Road (yes we have proof in his hand writing already in court documents) claims its only worth 400k, really he should be the next presenter on Come on Down show Bargains of the Century?

Back to the homepage here.

We use cookies on our website to give you the most relevant experience by remembering your preferences and repeat visits. By clicking “Accept”, you consent to the use of ALL the cookies.
Do not sell my personal information.
Cookie SettingsAccept
Manage consent

This website uses cookies to improve your experience while you navigate through the website. Out of these, the cookies that are categorized as necessary are stored on your browser as they are essential for the working of basic functionalities of the website. We also use third-party cookies that help us analyze and understand how you use this website. These cookies will be stored in your browser only with your consent. You also have the option to opt-out of these cookies. But opting out of some of these cookies may affect your browsing experience.
Necessary Always Enabled
Necessary cookies are absolutely essential for the website to function properly. These cookies ensure basic functionalities and security features of the website, anonymously.
Functional
Functional cookies help to perform certain functionalities like sharing the content of the website on social media platforms, collect feedbacks, and other third-party features.
Performance
Performance cookies are used to understand and analyze the key performance indexes of the website which helps in delivering a better user experience for the visitors.
Analytics
Analytical cookies are used to understand how visitors interact with the website. These cookies help provide information on metrics the number of visitors, bounce rate, traffic source, etc.
Advertisement
Advertisement cookies are used to provide visitors with relevant ads and marketing campaigns. These cookies track visitors across websites and collect information to provide customized ads.
Others
Other uncategorized cookies are those that are being analyzed and have not been classified into a category as yet.
SAVE & ACCEPT